I’ve been chipping away at the trailer most weekends. I go there for a few hours and pull out more stuff. Last week I removed the shower and the last wall so now nearly everything is gone. I’ve since cleared up the junk and lifted the carpet which makes a huge difference. Really yuuge. Bigly even.

For now here’s a 22 second video of the mess I’ve made. Pretty happy about getting that shower out and the wall with a million rivits. Now I have an excuse to be smelly. 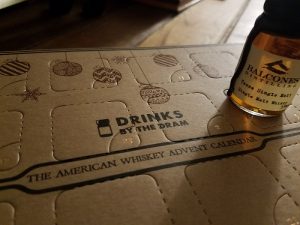 The first job was always going to be to get everything out. With a hammer and a screwdriver I filled the car with pieces of cabinets and seats. 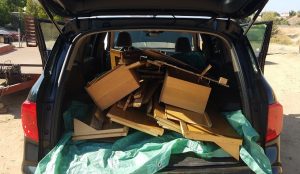 Just drive slowly past any bins I see on the street.

After unscrewing a half a million screws that were over my head my right hand was shot…. and it was my strong one…. While a crowbar and a large hammer would have been faster, I needed to unscrew everything from the walls or it would rip larger holes in the shell.

I looked at getting battery power tools, a drill, a saw, whatever but instead found a 1500W inverter that I could connect to the car battery. What a difference. Ripping out shelves with a powersaw and taking out a million screws with a drill is much easier. I held aloft my magic inverter and screamed “By the power of Greyskull…. I have the poweerrrrrrrr.” Yoda and Nalls declinded to be Battlecat. 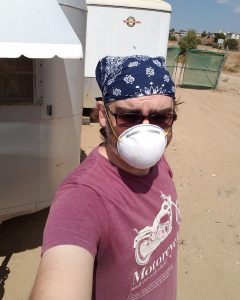 Anyway, after 3 days I’ve removed a little less than half. 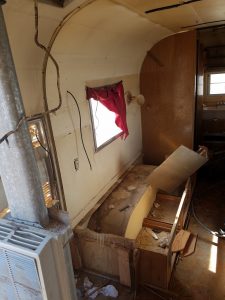 There was a bed, a cabinet and some shelves here a minute ago. 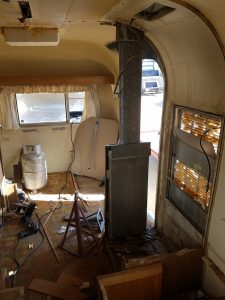 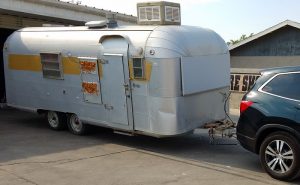 My latest project, a 1965 22′ Silver Streak. I dragged this home from Johannesburg, California, a middle of nowhere in the desert over 100 miles away. Over the next year I fully intend to regret my decision and curse everyone and everything involved in this project as I try to restore it.

The outside as you can see needs some work. The other side has a garbage bag for a window. I’m thinking of changing that to glass or perspex. 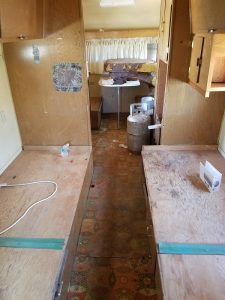 The inside needs a bit of work. A can of petrol (or gas for my American friends) and some matches would help with the smell.

Not sure if my geography is off here, LA is a big place. With a job offer in the bag and a few weeks off I cleared out on my bike. The original plan was to go to Mexico to Ciudad Juárez. Christina McMahon from my tiny hometown of Carrickmacross, Ireland,  was going to fight for a world boxing title. I packed my Irish flag and a tent and set off. 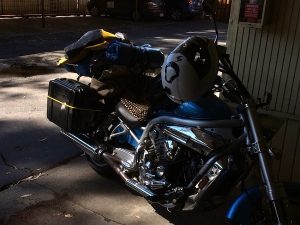 Packed on a beautiful morning. There’s almost room for me.

Mistake number 1. Bad geography. It’s called Death Valley for a reason. While it might be in the middle of a rare bloom from some rain it’s still a) the desert and b) hot.

Mistake number 2. That small windshield doesn’t do much. It has a crack in it. I can just get rid of it.

People go fast on the highways in California. Really fast. Over 60mph on a cruiser without a windshield it gets to be more work with all the wind. At 75 mph you’re just holding on and you get tired really quickly. When it’s 100 degrees in the shade in death valley this makes it tough going.

Day 2 I woke up in a campsite in Arizona in bits. A combination of trying to hold on to the bike while not drinking nearly enough water left me feeling like I’d been doing the 12 pubs of Christmas and fell a lot. I tried to keep going but after an hour I was pulled in at a Starbucks near Phoenix weighing my options. I could

a) try and keep going

c) try something else. 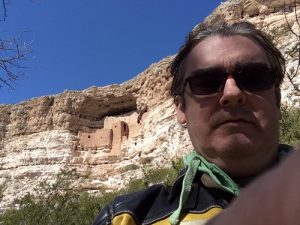 Me. At some cliff dwellings.

Once that decision was made it became much easier. I turned left instead of right and found a nice campsite. The next day I  saw some ruins of cliff dwellings, lots of desert, rocks, national parks. Ate a lot of meatloaf, met some nice people. One thing about Arizona is the snakes and insects. There’s signs at all the rest stops warning about them. So when I found this at a campsite, well, it was a good thing I had packed more pants. 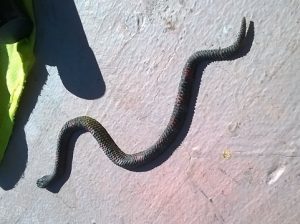 Snakes on a bench

I was heading up to Sedona, I’d been there before, it’s a beautiful place. I hadn’t counted on it being Spring and in the mountains. It was cold in Sedona. Also full. All the campsites were full. The queue in to town was about 4 miles long. I saw it on my way out and heading to Flagstaff. Where is was even colder. I checked the weather forecast and it was expecting 28 (about -2 in real numbers) and very quickly my plans turned to forget camping, I’m getting a hotel. 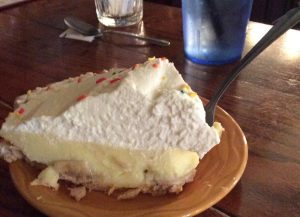 This place as famous for it’s pies

Found a nice sports bar to watch the fight. World Title Boxing? Nice beer? What could be wrong? Oh yeah, women’s boxing isn’t on TV. Though I think the foxy kind was on a pay channel in the hotel. OK, I had some more meatloaf. I really got into the meatloaf on this trip.

Flagstaff is on Route 66. Or what’s left of it. Headed west as quickly as possible and once I was below a mile in elevation the weather picked up. Another slow day bouncing along what’s left of 66. Lots of tack, sorry, Americana. If your license plate falls off your car it’s rubbish, so recycle and put it in a store on Route 66 with a $20 price tag on it. 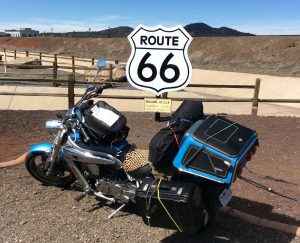 Still, it was a nice ride, a lot just off the highway, quiet, scenery changing from the high elevation to desert and in between. Some road was barely passable, I did about 10 miles on one part in an hour, mainly on the gravel at the side of the road. The potholes had joined to form landscape.

Another night in a hotel, this time at a Casino in Luaghlin, Nevada. Why pay ~$30 for a campsite when I can stay in a hotel for $22. With a voucher for a free coffee at Dunkin Donuts. Best deal I made on the trip.

Then the rest of the long ride home to Pasadena before leaving the next day for Vegas with herself. All in all, a great trip. 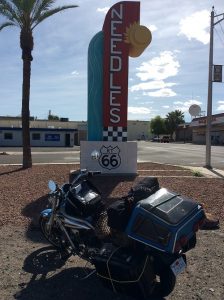 Somewhere a bit warmer on Route 66

Lane splitting on a motorbike is legal in California. Like most of the world. Most of the rest of the US and Canada don’t like it though. I missed it in Canada, pushing to the front of stopped traffic at a red light, I mean, who wants to wait in traffic?
Of course, this being California they go nuts. The rules on lane splitting, like rules about using your indicators, speed limits, driving sober are just things to be ignored. I can be driving at the speed limit down the freeway and a motorcycle will zip between me and the truck next to me, doing 90 mph. It’s crazy and scary, even in my over-sized SUV when they do that.

I do like it when I work in Burbank. The 12.1 miles, nearly all 5 or 6 lane freeway can take over an hour. Or on a bike in the stopped traffic about 20 minutes. This morning, riding in to work I noticed another motorcycle coming up fast behind me. Since he was much more used to this than me I swung in to the lane proper and gave him a nod to let him pass me. Which he did with a little wave. They’re all real friendly out here.

Then as he sped away he leaned back to stretch out both arms. In a spot where traffic was moving again, so traffic is maybe at 30 miles an hour and he is on the white line between lines of cars and trucks doing 40 or 50 with no hands.