Yeah I know lots of blogs have a rash of new posts with the Oh I’m going to blog more tagline. I’m sure I’ve done it myself.
That’s not the reason for this rash of posts.
I stopped just writing and clicking Publish, and am trying to up my editing game. Yeah, there’s still lots of mistakes. Get a red pen and fax me….
Anyway there were a few waiting to be edited and posted and I changed phone and lost my 2 factor authentication so couldn’t log on. Now the ones that have piled up are getting posted. Then it will go back to the infrequent posts.

Day out in LA 6 – Echo Mountain

When the bodies were all cleared from the trail I headed up Echo Mountain. On my own this time. Damien muttered something about borrowing a shovel and cleaning his car.

It’s not a difficult hike, just long and all uphill. The Grouse Grind or the Chief in BC are much more difficult, they’re much steeper but Echo Mountain is just a long uphill walk.

On the way up you have some nice views, this is towards LA. It’s a lot greener than I expected, from the ground this is all city as far as you can see. 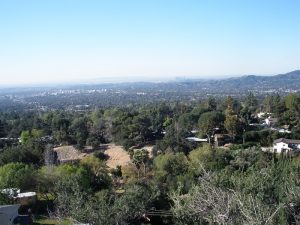 I got proof that I made it. 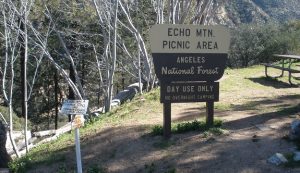 There used to be a hotel at the top, trains used to run up but now all that’s left are foundations. Peace out man. 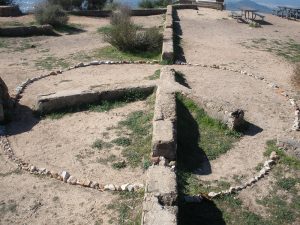 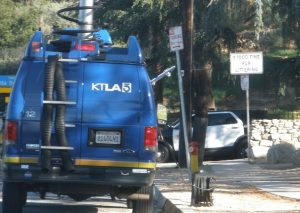 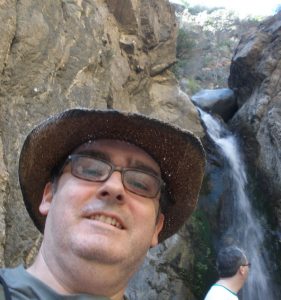 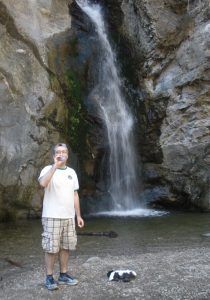 There’s something about North America that doesn’t seem real. It’s not just Los Angeles and the fake tits, the ass implants, the botox heads. It’s everywhere. Especially the west coast, where buildings are made of wood and plastic, seemingly as permanent as the forts and huts we made as kids. Though maybe not as grand as those castles we fought for.

You miss it, the stone and brick, the old buildings, the old roads, the narrow winding streets. You can spot it a mile off, a building designed exactly for a purpose, function is something I can appreciate, but I miss the permanence. Reuse and oddness makes character. You can pass a building and know straight away, with no signs, that it was a McDonald’s. Maybe years ago but it’s still a pile of wood and plastic that was built just for this. When Burger King take over they’ll knock it and build one of their own

Not like Europe where what was once a grand house is now sixteen flats, a tenement is now a restaurant. No clear lines from the kitchen, the waitress struggles trays of food up narrow back stairs to small ill-shaped rooms.

The almost temporary buildings here are remind you of a movie back lot, just a facade painted to look real.

In LA it’s worse. There’s no real weather, just sun and warm or hot or very hot. No snow, feck all rain. Listening to the Ben Folds sing of “The smell of cold, Car seat is freezing” songs about the weather and they seem real. Not where I am. No, it’s all not quite real. It’s all just fake,

Someday I’ll wake up. In the rain and the cold in a damp room that was built a few hundred years and a few dozen purposes ago. And LA and all of North America will slip away, half remembered like another nameless movie I saw last month.

It rained the other evening. All the dust from a few weeks rising in the wind, brown clouds against the sunset. Like Armageddon. People running for cover, hair askew, holding anything over their heads. A homeless guy frantically pushing his bicycle and two kiddie trailers of his world to the shelter of a gas station wall.

Traffic going crazy, not the skidding but the sudden rush to get home, get out of this. Weeks of fallen leaves, small branches bounding along the road. Like the Apocalypse has come and gone, a scene from the zombie movie. A flash of lightening, some rain. It will be gone in ten minutes.

Against it all, a girl, hair streaming in the wind, face raised and eyes wide, a newspaper over her head, a smile like it’s the end of a drought.

Days out in LA 4 – Newcomb’s Ranch

Not far from me are the  San Gabriel Mountains and the Angeles National Forest is right there. Even without going on a freeway (cause no one can drive in LA and I’m not quite ready to take a motorbike there) I can be on the Angeles Crest Highway in about fifteen minutes. Then I’ve got long, twisty mountain roads with great scenery and since this is California, great weather. The perfect place for a motorcycle.

You do get some kids trying out their sports cars but mainly you get a lot of bikers. 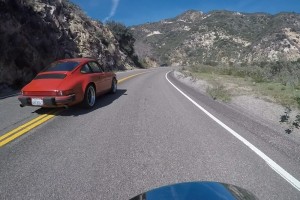 Why yes that is a double yellow line on a bend just 30 seconds from the next passing lane. Great idea to pass.

The road is closed in parts most of the year but there’s enough open for a decent ride. On Friday I got as far as Newcomb’s Ranch, a log cabin type bar selling coffee, beer and burgers. Outside a line of bikers sipping drinks and smoking cigars.

Anyway, it was a nice ride;

Days out in LA 3 – Palm Springs

OK, it’s a little further than LA but it’s just under 2 hours from Pasadena. Apart from a delay when parts fall off the car. We went Friday night to meet Rachel for dinner. At this Mexican restaurant there was a guy playing music. Think Mariachi Band. But just one guy. And he was playing a harp. 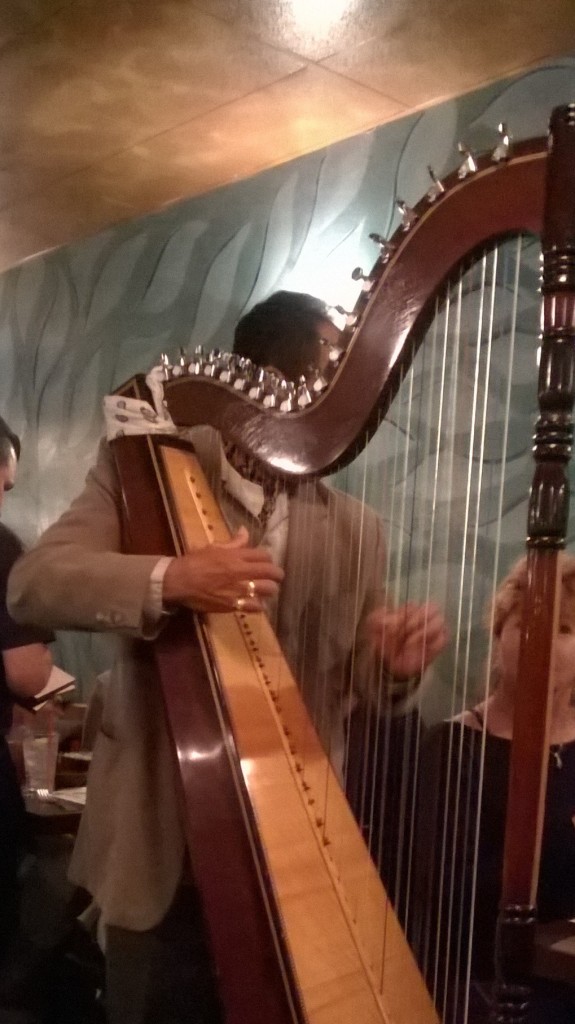 Downey’s not too far a spin. Nice sunny day to take the motorbike out. There’s the world’s oldest operating McDonald’s. I stopped, got a photo and went to Subway. 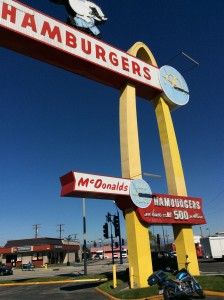 The real reason to go there though was for this picture of a street sign. 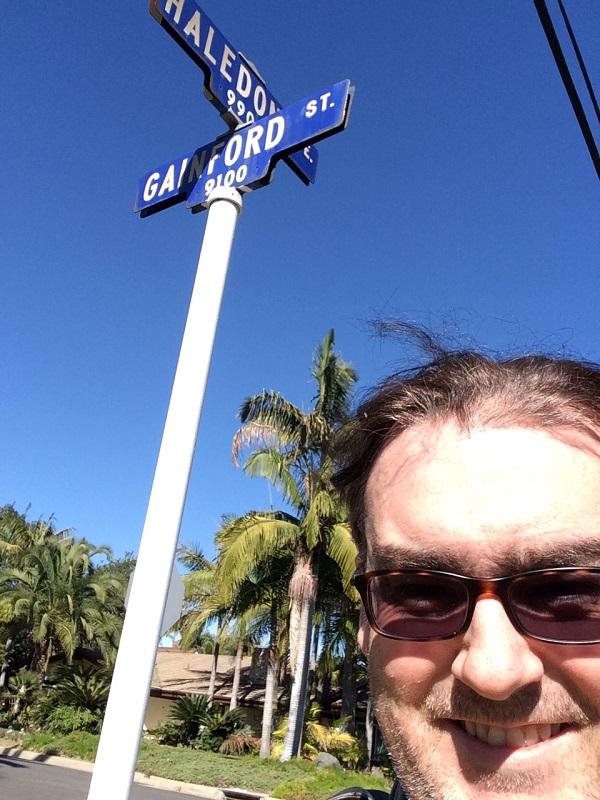 Days out in LA.

With plenty of time in between hunting for jobs I’ve been bouncing around LA. This was at the California Science Centre in downtown LA. Outside they have an A-12 blackbird which used to fly at Mach 2.

Inside they have lots to see, an Apollo Spacesuit, Mercury and Gemini Capsules. A model of the Wright Brother glider along with a flight simulator for it. Lots of exhibits for kids showing how things work, wings, air, materials and construction. Get to feel what an earthquake is like. There’s lots on nature, habitats, sea life and ecosystems.
I could have gotten pictures but I was distracted by getting to see Endeavour.

They have a huge exhibit, a mock up of the Mission Control showing the last take off for Endeavour. A movie showing the trip through LA as Endeavour came along the streets. Then you get to go in an see it. 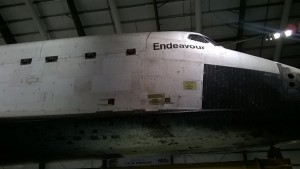 Yeah, the picture is pretty poor, my phone’s not good, but this place was amazing. There’s something about this huge huge machine that went to space and back so many times. My jaw dropped when I went in. Some old guy that worked there (they have people all over the museum demonstrating experiments and answering questions) just smiled at my open mouth awestruck face. When I was leaving you could see it on people coming in. That whole sense of wonder, of awe and almost reverence.

If you get a chance the Museum is in downtown LA and is free in. 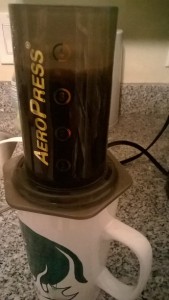 The Best Wife Ever ™ got me an AeroPress for Christmas. This is to replace the Keurig she got me a few years ago.

Why change? The Keurig is nice, makes decent coffee, easy to use. However the AeroPress makes better coffee, still easy to use and I wont fill the landfill up with plastic cups. Also next time I go camping I wont be using instant and the Keruig is a little big to drag around on the back of the bike with me.

It’s also much easier to use your own coffee with than the Keruig, I had an EkoBrew cup and Keurig’s reusable cup but neither worked great and were a bit of a hassle. This is much easier to use. Easy to clean up as well.

So, on another note, I have a Keurig for sale, anyone want one?