For weddings and a funeral.

Published March 28, 2015 | By gerry gainford
The Irish Times has an emigration section and I submitted this a few months back. Haven’t heard a thing back so publishing it here. This blog has low standards, I’ll publish anything.

For weddings and a funeral.

I knew there’ll be weddings when I left. Some lad from school would tie the knot and I’d miss the get together with the old gang. One year there were 4 weddings spread over three months, I had to choose one so I made it to the sister’s and missed the close friends. Photos on FaceBook don’t do much.I knew there’d be christenings. Another niece or nephew I wouldn’t see till they were walking and talking. I wouldn’t recognise them the next time I set eyes on them, grown a foot or two and they wouldn’t know me, not remember my last visit.

But it’s the funerals I never knew l’d miss. The early morning voicemail when I turned on my phone. Get home. The doctor said to call the family. The priest was in already.

A mad rush to find a flight, anything heading in the general direction, damn the connections in Heathrow that take hours,  or the layovers in Chicago, the bad weather, the delays holding me here. Just hold on a minute longer. An hour longer. Let me get back on time. Let a tailwind get us in early.

A late arrival at a hospital bed. On time, there at the eleventh hour.

And the clock strikes twelve and one and two and still he’s there. Asleep on the bed he hung on for all he could and my hurried week off work is slipping by and by and I wonder if I’ll have to head back before it happens. Before the end.

It’s then the thoughts slip in, unbidden, unhelpful and shame-filling. If it happened now the funeral would be on Thursday, today he might be buried on Friday. Today and I’d rebook my flight. Today and I’d just miss my flight and get another one.

I arrived at the hospital at six in the morning on the way to the airport. A last minute visit to say goodbye, sure and certain that this is it. There’s no real response, years of fighting cancer and this latest blow leave him to groggy at this early hour. Struggling to remember my name. A brief flash of recognition before he fell back asleep.

My life on the other side of Canada won’t wait. Things were dropped suddenly, work to get back to. I can’t hang around forever, I don’t think the dole would have me.

Will he be ok? Will I get home again? Will I make it on time if I get the phone call again? Or will I be sitting at thirty thousand feet with a tiny beer watching bad moves while my voicemail fills up to tell me I went an hour too early. A minute too soon. Should have stayed another day.

If it’s next week, or next month, can I drop all and get home again? Will I end up sitting wondering if this is the time it will happen. Should I be on a plane or will or will I get the phone call too late. Be stuck. No flights. Life keeping me from getting there.

I knew I’d miss the weddings, I never thought of the funerals.

Can we all leave ya a picture of Jesus?

I’ve been catching up on Breaking Bad. A whole lot of people are getting shot, beaten up, run over and disposed of in tubs of acid.

Sitting alone in the house (just after a particularly violent shoot everyone scene) there’s a knock at the door.

It’s a quarter to nine. It’s dark outside.  I’m not expecting anyone. Someone’s head is bleeding on the TV. I nervously open the door, phone fingers poised to dial 911.

There are 3 guys. In suits.

They ask about my t shirt. It’s from the Big Bang Theory. I’m about to close the door.

“Can we all leave ya a picture of Jesus?”

Why you can’t play guitar

I’m musically un-gifted, I don’t have a note in my head and have all the rhythm of radioactive decay. Most importantly I can’t play guitar, so as some one who obviously knows nothing about this I feel that it’s my right, nay my duty, to spout an expert opinion on the internet. That’s what Al Gore invented this for.

It’s all fine as you learn the basics. D is nice and close together, C is OK, nice and easy, G is a bit of a stretch. Am? A breeze. And then they throw it at you. The reason you can’t play guitar. The F word. Or in this case the F chord. As anyone who has ever taken guitar lessons will know, this is a the chord that stops you in your tracks. Hold down all the strings on the first fret with 1 finger, while using the other 3 fingers to hold down strings further up. Any sensible person would just stick a capo on and do an E chord. E, like the Am is an easy chord. You may have to pause mid verse to do put on the capo but it makes much more sense. If your sense of rhythm is anything like mine you probably won’t even notice the pause.

The F chord, it’s impossible, the grip strength needed is incredible. Probably about 4 million pounds per square inch. There’s no way to hold down all the strings like that properly. This is why you were taught guitar wrong. You’re right handed and trying to do this with your left. You’ll never have that grip strength.

My solution (Gerry’s Patent Pending Guitar School Trick)? A week before you start lessons just start wanking with your off hand. Grip strength skyrockets and that F chord? Sorted.

After watching the movie Fat, Sick and Nearly Dead we have decided at the Hoefer-Gainford household to do a juice cleanse. Like the ones here.

This idea involves buying lots and lots of fruits and vegetables (and I do mean lots) and running them through a juicer and drinking the juice. And some water. And nothing else. This will cure all manner of ills and blah blah blah, cure everything.

On day 8 now (day 11 for Ursula) and it’s a terrible idea. One of us will kill the other one. And quite possibly eat the body. If you walk by me with a burger I may stab you. I’m jealous of the cats when I open a can of cat food in the morning. Those smug bastards getting to actually eat food.

It’s been recommended we go for 21 days. That may be only 18 for me but it’s still another 10 days. If you find my body (or quite possibly not my body, just a few bones with teeth marks) you know where to look. If Urs goes missing, in my defense, I am pretty darn hungry.

I like to cook, but recently (last few years) I’ve cooked less and less and am now down to repeating the same 2 or 3 recipies over and over. So this year, as we have 30 or 40 cook books, I thought I should try and make something new each week from them. Maybe I’ll end up expanding my rota of recipies to 4 or 5.

Bear in mind these are all gluten free vegetarian with no mushrooms. Made for me who likes meat and wheat. The mushrooms are still off the menu as they are the food of satan.

So I made vegan enchiladas yesterday. Just not actually vegan as I added cheese. They were from a vegan cookbook, The Oh She Glows Cookbook

but I’m also not giving up on cheese. They were tasty. Like really tasty. The avocado – cilantro dressing worked a treat. Even though I was missing half the spices (onion powder?) these worked well.

Which comes to this morning. So happy I have left overs ready for lunch for work. Feeling all proud of myself that I have a delicious, healthy lunch just ready for the microwave. All smug about it until I arrive at work and go to put it in the fridge and find last weeks curry in my bag. With no rice, just about half a cup of too old curry in a large container.

I really need to clean out the fridge more.

Herself won the Calor Housewife of the Year award with this advent calendar.

What better way to celebrate the season than by sampling a different craft beer each day? 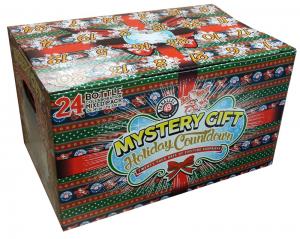 There was one tiny problem, we’re flying to Mexico for Christmas and I’m not trying to bring beer with me so I had to finish up on the 21st. So I had 5 beers to drink over the weekend. That went fine, Saturday I had two of them, two very tasty beers. Yesterday though after my Christmas drink of choice (Baileys coffee) I had three of them. And they leave the strong ones to the end. The 9.5%, the 11% and who knows what the last one was.

A little tender this morning. Crafty brewers, they sneak up on you.

In one of the many online contests I won a DVD of the new Godzilla movie from The Province. Just one small catch, I have to pick it up from the newspaper office. Downtown. 40km from my house. During the hours of 9 – 5, Monday to Friday. So, should I take a few hours of work, travel down there or just buy it on Amazon? Decisions, decisions, decisions. I have a feeling the offices of the Province are littered with uncollected prizes.

There are a few twitter accounts pushing tankers and piplines and today they’re going all out with the information. I’m all for progress, but if it’s so safe and economically sound, why are they fudging the figures?

Like this one. On the left is the tweet showing the many many more tankers in Norway than in BC. 25 seconds on Google Maps and I’ve got the 2 maps to the same scale on the right. Also, Norway is a lot of open ocean, BC is a lot of narrow passages. 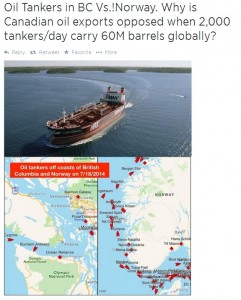 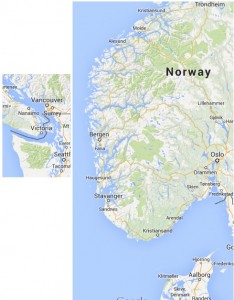 If this is so safe, why are they fudging the maps to make it look like this?

It reminds me of these maps.

Then they tweeted this: 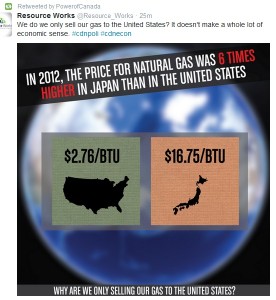 That’s a great point, why aren’t we selling to Japan? Wait a minute, 2012, did Japan have any reason to increase the amount of natural gas they use? Something about a recent earthquake shutting down 11 nuclear reactors?

Now Japan only pays about 3 times the US. Which could be due to the fact the US has natural gas and Japan doesn’t. Then there’s the cost of moving the gas. I’m guessing getting it across the 49th parallel is easier than the Pacific.

So with all these tweets how about using real numbers and comparing like with like. Use maps that are to scale and don’t have mysterious disappearing islands. This isn’t Lost you know. And use current figures and projected figures for the future, not a historical jump that was due to a massive earthquake.

If for no other reason than this, I would oppose the pipeline and the tankers. If you have to lie about it then there’s probably a whole lot more going on that you can’t fudge the numbers for and are keeping quiet.

So tomorrow is Friday 13th. And a full moon. And I’m taking trainees sailing for the weekend. With small craft warnings for the up to 25 knot winds. We’re taking a small craft.

It’s going to be a fun weekend.

Bike is back on the road

The weather’s getting better so it’s time to put the bike back on the road. Oh motorbike, how I’ve missed you.